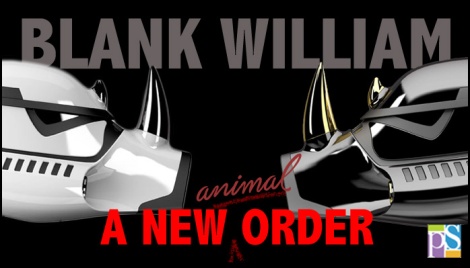 I’m on a roll. While writing about Travis Durden, I found another artist whose digital inspiration puts a twist on Star Wars as the newest release of the franchise is due to hit the big screen tonight.

Blank William, a New York-based artist, has created a digital series that poses the question: What would animals look like if they were outfitted for the Empire? He calls his series The New Order: Black and The New Order: White.

Using the stormtrooper as the foundation for his creations, William interprets the armor for the rhino, elephant, and hippo. Why these animals? When it comes to objects of artistic inspiration, anything goes! Nevertheless, the contrasts between the sleek, glossy finishes and their matte counterparts adds visual interest to these engaging, virtual sculptures.

Hop on over to his online gallery (and then go see the movie)!

The Poetry of Seeing offers art lesson ideas and inspiration, as well as thoughts on art education, reviews, classroom organization, and more!

Classes for kids, teens, and adults serve those in Southern New Jersey and Pennsylvania.